Stepping into the future with Mark Dvořák 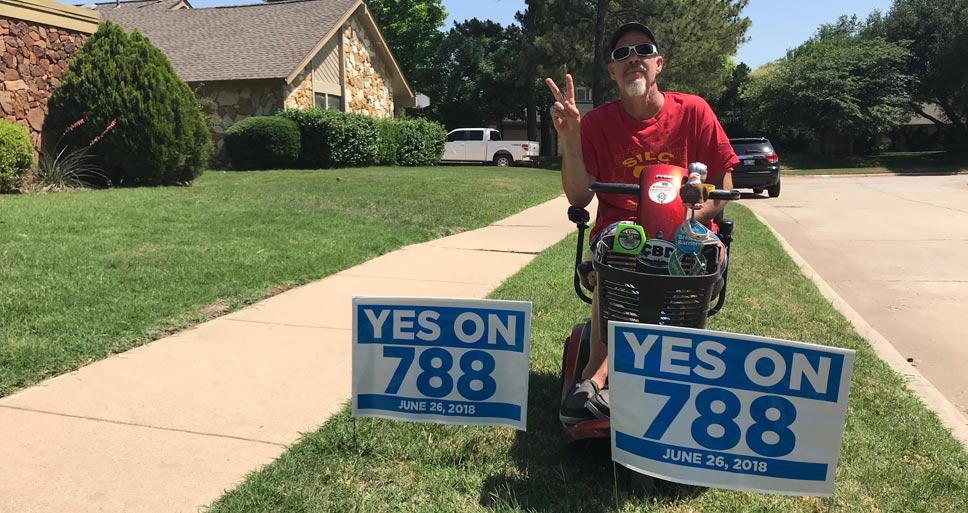 There are few things more truly magical than watching a child take their first steps. Standing up, holding on, tottering, until finally they’re able to make that unsteady journey a few feet into a parent’s waiting arms. Cheers, hugs and tears abound as we celebrate an essential yet seemingly simple activity: walking. These baby steps quickly progress until before you know it, you can’t even keep up with the little buggers!

I used to take walking for granted and thought nothing of standing up and strolling across a room. Walking is actually a controlled fall with each successful step forward, in effect, preventing you from falling flat of your face. It is a very complicated process that involves numerous biological components including the brain, muscles, and the ever important communication pathway between the two.  If all of the components aren’t working in flawless synchronicity, the results can be devastating. Just ask my “little” brother, Mark Dvořák, a transplanted Texan now living in Norman, Oklahoma. 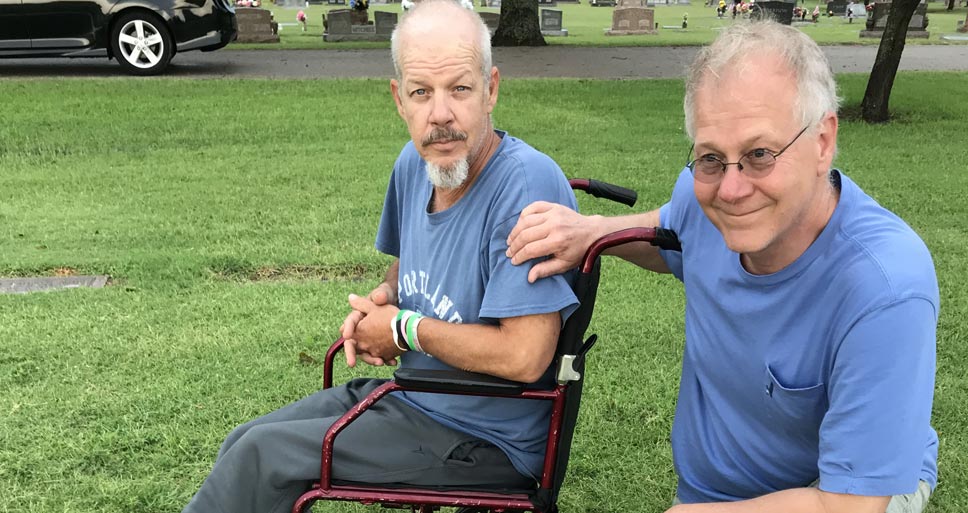 We grew up in a fairly typical household, doing the usual things: playing sports, going to church and trying not to get into too much trouble. Mark was by all accounts a pretty normal kid and an above average athlete. He was a good Little League pitcher, a decent basketball player and a member of his high school’s golf team. In his 20’s, he worked in the Oklahoma oil fields, very physical and demanding work.

Then, almost 30 years ago, when he was in his late 20’s, Mark began having more and more trouble walking. For no apparent reason, he started tripping over his feet, oftentimes falling down. Once, while playing softball, Mark was running out a base hit and he inexplicably veered out of the base path and ran right into the fence along the first base line. Another time he was trying to backpedal while playing basketball and ended up flat on his back. It was then that he knew something was wrong, but what? 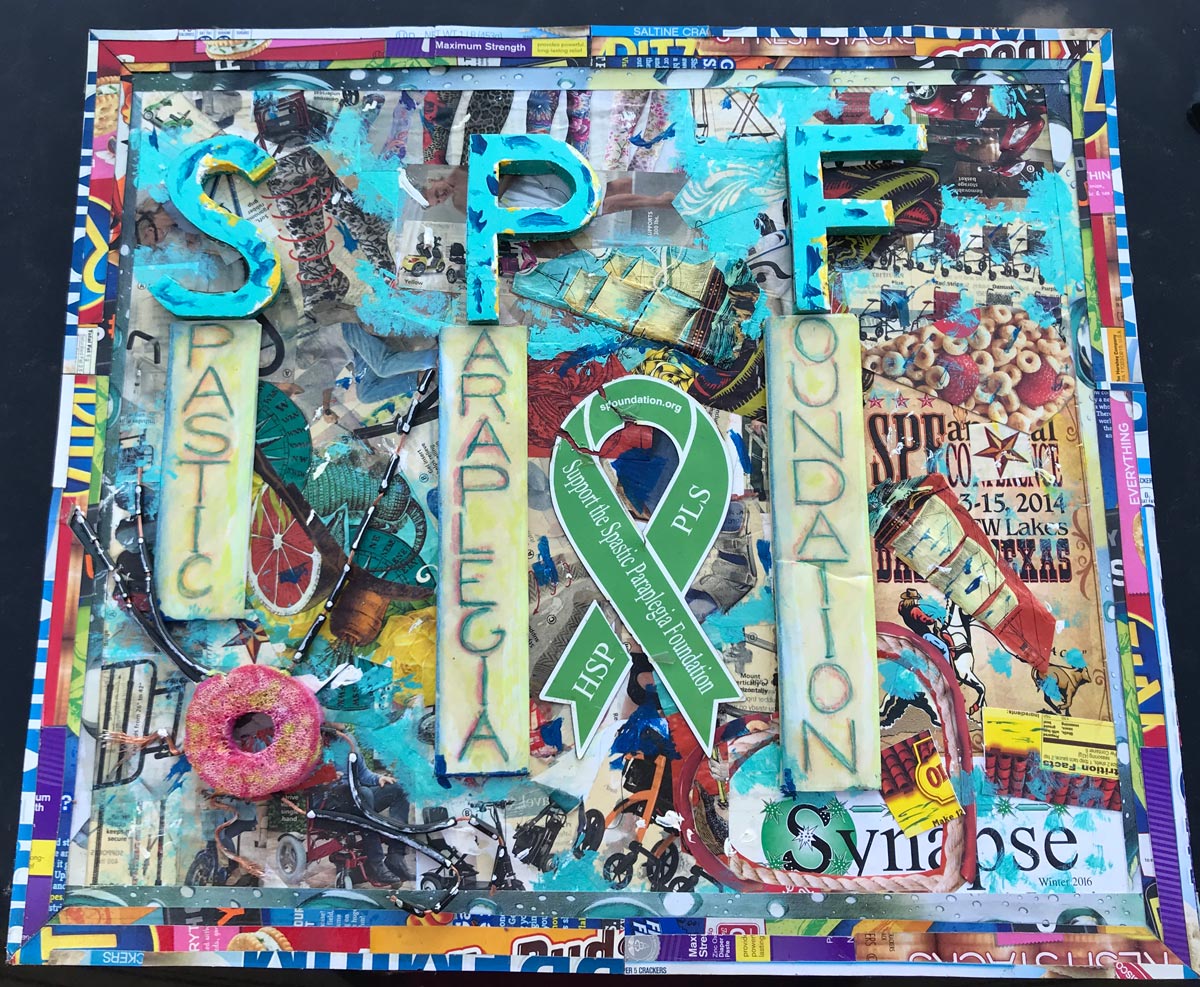 Several years of tests ensued resulting in a diagnosis of Hereditary Spastic Paraplegia, or HSP. HSP involves a progressive degeneration of the upper motor neurons, causing many problems including, but not limited to balance and gait disturbances, leg weakness, severe pain as well as bowel and bladder problems. Losing the ability to walk also understandably results in anxiety and depression as one loses their independence associated with the lack of mobility.

As Mark’s symptoms worsened over the years, he needed more and more help. At first, he just needed a cane, but now his legs are virtually lifeless and he needs a wheelchair or motorized scooter to get around. It takes every ounce of his concentration and effort to pick one leg up and slowly take a small step that so many take for granted. Routine chores like taking out the garbage now take over a half an hour, but he doggedly insists on doing as much as he can by himself to lessen the burden imposed on his family by his condition.

Not only was Mark trapped in his body, he was also trapped in Oklahoma, the state with the highest incarceration rate in the country and a fervent “just say no” attitude when it comes to cannabis. Because of this, medical marijuana was completely out of the question.

His doctors, however, had no qualms whatsoever loading him up on all sorts of legal painkillers and psychoactive drugs. For his severe back pain, Mark was given Lortab (a combination of the opioid hydrocodone and liver destroying acetaminophen), Roxicodone (oxycodone hydrochloride), a very strong opioid analgesic and even Fentanyl, a substance several times more powerful than morphine. For anxiety and to help him sleep, doctors switched Mark between different benzodiazepines including Lorazepam (Ativan) and Clorazepate which cause dizziness and decrease one’s ability to concentrate. 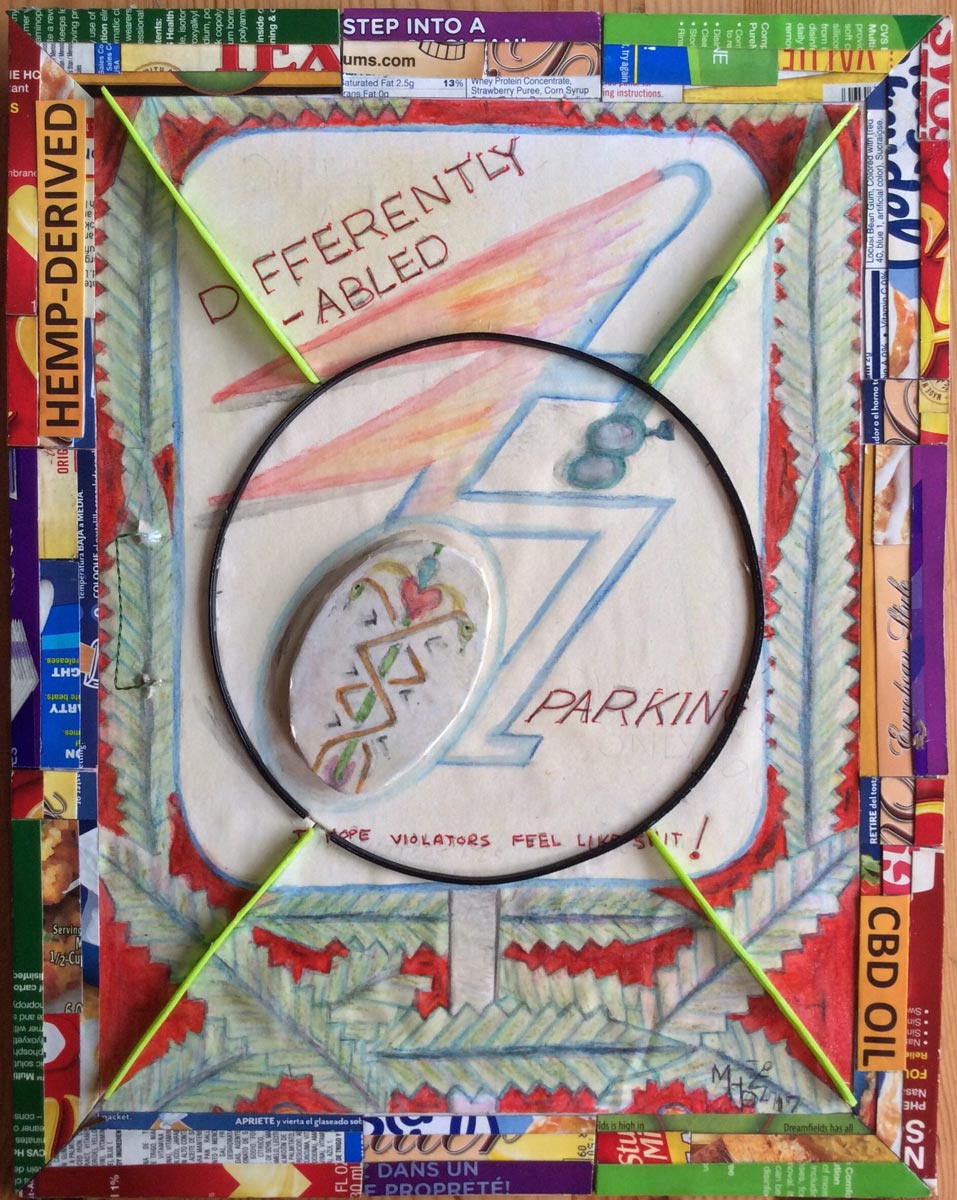 To help Mark deal with his depression Citalopram (brand name Celexa), an antidepressant in the selective serotonin reuptake inhibitor class, was prescribed. These were so strong that they made him feel like he was going to die, so he didn’t take them very long. This mélange of medications caused Mark to live in a fog. They also made him more claustrophobic and caused panic attacks, the latter of which landed him in the Emergency Room one night where a shot of Valium in his keister did little to help. His debilitating illness was being treated with incapacitating drugs.

Despite this, Mark didn’t let his depression show, but rather stoically accepted the hand that fate dealt him. This started to change when Mark became more involved with the Spastic Paraplegia Foundation (SPF), a not-for-profit voluntary organization that is dedicated to finding a cure for Hereditary Spastic Paraplegia (HSP) and Primary Lateral Sclerosis (PLS). He attended his first SPF conference in Nashville in 2005 and met several inspiring individuals. Mark also organized SPF Team Walks and Connection events to raise funds and awareness.

As Mark’s mobility declined even more, he began channeling his energy into his art, repurposing common items and used materials into eclectic 3D collage conglomerations. Other works of his utilize his unique drawing/drafting skills inherited from our father and painting ability passed down from Grandpa. Mark also crafts custom made frames using paper strips or colorful cut up cardboard containers. Several of his pieces focus on the “differently abled” as he likes to call himself. Disabled carries too many negative connotations. His “speedy wheelchair” logo was an instant classic in that it illustrates the positivity of swiftly moving forward within the confines of a wheelchair. Mark also created several pieces that relate to the SPF and the National Organization of Rare Disorders (NORD).

Mark frequents a weekly art class called the Healing Studio, instructed by the ever joyful and empathetic Jane Lawson. The Healing Studio is a supportive and individualized environment intended to improve the quality of life of its participants by providing a riskfree social atmosphere in which to experiment with the creative process through self-expression. It is held at the Firehouse Arts Center, a non-profit organization in Norman, Oklahoma. With guidance and support from both Mrs. Lawson and Douglas Shaw Elder, Executive Director of the Firehouse, Mark has been able to more fully develop his artistic capabilities. If you are an art collector or aficionado, Mark would be happy to create a custom abstract expressionism piece for you on commission.

Art provided an excellent outlet for Mark, but he needed more. Living in ultra-conservative Oklahoma, he was justifiably afraid to use marijuana even though he knew that it was safe and effective for several of his ailments, including pain, anxiety and depression. As a cannabis activist, I’ve learned a lot over the years from Mark about the draconian nature of the War on (some) Drugs and the actual, incredibly negative effect it has on typical Americans like Mark.

Then, in September 2014, I was speaking on a hemp panel at the Boston Freedom Rally with Chris Boucher, a long time hempster and senior executive at CV Sciences, a maker of high quality CBD products. Chris spoke about the many benefits of CBD and how his company was shipping to all states including Oklahoma, so I thought that Mark should give it a try. Soon after Mark began taking CBD, he noticed positive effects. He experienced much less pain and anxiety, he had more patience, better acceptance of his overall situation and he was happier. Wow! Not bad for a non-psychotropic cannabinoid, eh?

Around that same time, a little bit of cannabis serendipity, or cannadipity, took place. I became aware that Cheryl Miller, a long time patient activist with Multiple Sclerosis who passed away in 2003, was buried in the IOOF Cemetery in Norman, where coincidentally, our father and brother are interred. Mark’s visit to Cheryl’s final resting place inspired him to co-write an article about Cheryl with myself and her husband, Jim, for Diane Fornbacher’s Ladybud.com magazine. During my June 2018 visit to Norman, we visited Cheryl’s grave on the 15th anniversary of her passing and paid our respects to this very special freedom fighter.

Mark knew that the laws must change, so he took a more active role in the legislative process, lobbying and educating his local representatives and attending sessions like an Oklahoma Senate interim hearing on medical marijuana where he was stirred by the testimonials of patients and family members extolling the therapeutic virtues of cannabis.

Thanks to CBD, Mark was able to slowly reduce some of his prescriptions for pain and his mental health. He decided to take the last step in kicking his addiction by going Cold Turkey in October 2016. This resulted in several of the hardest weeks of Mark’s life. He couldn’t sleep and was much more irritable as the pharmaceuticals sweated out of his body. But his loving family and the art community stood by him, allowing Mark to emerge from the ordeal a stronger, healthier person.

Mark makes it a point to let his doctors know how cannabis has dramatically improved his quality of life. Sadly, many are uninformed on this subject because the endocannabinoid system is not yet a standard part of the medical school curriculum. One of our relatives, who did not know that Mark used CBD to wean himself off of opioids and other drugs, saw him a few months later at a family reunion and remarked about how good he looked and how much more like his old self he was. She noticed a big difference in his demeanor and engagement. In essence, Mark came back to life. Cannabis resurrected his soul and provided him with the clarity of mind that motivates him to do more to help others.

The impact of medicinal cannabis on Mark’s life is reflected in several pieces of Mark’s artwork. He also wants people to know about the environmental and economic benefits of industrial hemp and the negative impact marijuana prohibition has on society.

More recently, Mark has been supporting Oklahoma cannabis companies by using Pure Cannaceutical brand products manufactured by Ryan Early’s Can-Tek Labs. These are purchased from local companies including CBD Health Solutions OK and Red Dirt Phytoceuticals. They both provide top shelf service, and the kind folks at Red Dirt sometimes even deliver Mark’s medicine to him. Mark’s desire and ability to help others got a boost when the Governor appointed him to Oklahoma’s Statewide Independent Living Council (SILC). The SILC works with the Oklahoma Department of Rehabilitation Services to help implement the state’s plan for independent living. This includes providing assistance with many things including housing, employment, education, mental health and in-home services.

Mark has continued his recovery and now is even able to take slightly bigger steps and stand upright for longer periods of time. He lost his ability to walk incrementally and he’s regaining some mobility in a similar fashion. Mark’s baby steps of progress mirror Oklahoma’s own emergence into the age of cannabis. A bill authorizing the cultivation of industrial hemp for research was signed into law in April 2018 and Proposition 788, which legalized medical marijuana in Oklahoma, passed in June.

Here’s hoping that Mark and other Okies will soon have unfettered access to all of the 100+ therapeutic cannabinoids that have been discovered in cannabis. I no longer take walking for granted. I cherish each step I take and constantly remind myself how lucky I am. We’re stepping into the future and I’m proud to have my little brother Marky Mark leading the way.