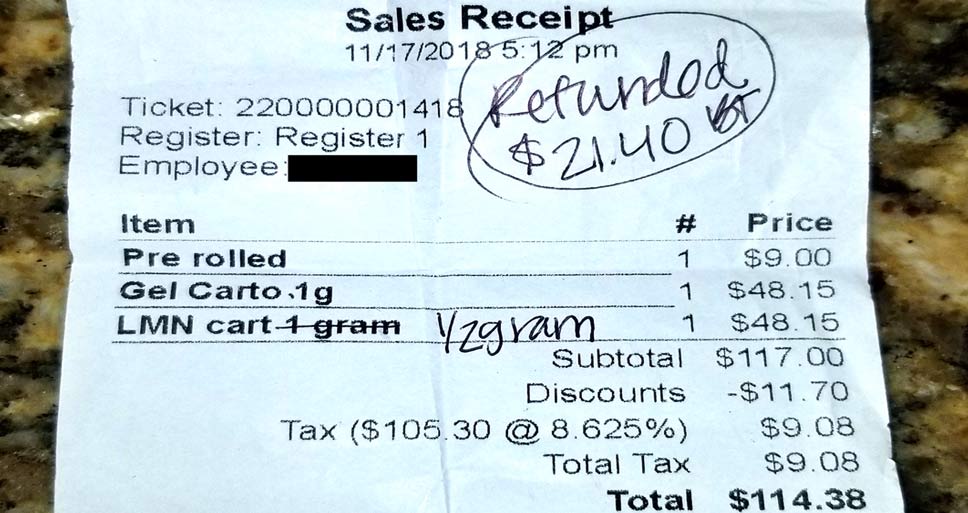 I stopped into The Peak dispensary (2120 NW 23rd St. OKC, OK) as I heard they had some specials on pre-loaded vape cartridges. I was greeted by a very friendly staff and nice looking shop with a large cultivar selection of preloaded cartridges.

I ultimately ended up selecting a 0.5 and a 1.0 gram cartridge branded “Cannabis Dan”; one sativa and one indica. I left feeling happy with my purchase and was excited to get home to sample it.

First up was the “sativa”. The first pull had a very “off” taste, the second and third pull burnt my throat and reminded me of smoking a nicotine loaded vape pen. Not Good! I ended up switching to the “indica” cartridge which had almost the same exact taste and effects.

Looking at my receipt to get the phone number to call I noticed that I had been overcharged. I was charged for 2 one gram cartridges instead of the 0.5 gram and 1 gram cartridge.

Still having that harsh feeling in my throat and feeling like I had just puffed on a nicotine vape I got very curious and concerned so I took the cartridges, packaging and all, to FAST Laboratories to see what was going on.

Upon receiving the test results from the lab I was surprised to notice the cannabinoid percentage was not as advertised on the packaging. As you can see from the results below, the THC and CBD levels were significantly lower than claimed. Ironically the CBG and CBN (amazing cannabinoids) were more prevalent. They should have listed these other cannabinoids, it would help them sell more products.

Lab reports and the cartridges in hand I went back to The Peak to inquire about which lab performs their lab testing and to give them a copy of the FAST Labs reports so they could see the results for themselves.

The staff, again friendly, took the lab reports and cartridges and went to the back of the shop. The sales staff ended up placing me on the phone with the owner who asked, “What’s going on now?” When I explained he wanted to know about what method of testing was performed to which I directed him to the laboratory. (Full results and method below)

Ultimately the sales staff gave me another cartridge that they had decided not to carry apparently as I purchased a preroll to deal with the Anxiety and stress of even having to deal with this issue to begin with. Tried the cartridge and its pretty much the same effects with this one claiming over 90% THC.

It was unfortunate that I was only given a refund for the 0.5 gram cartridge portion as I only sampled each of the cartridges.

The moral of this story is when the dispensary tells you a product has been lab tested, demand to see the results. If they can’t provide the results then they are non-existent at that point. Patients in Oklahoma are becoming educated on cannabis and testing. 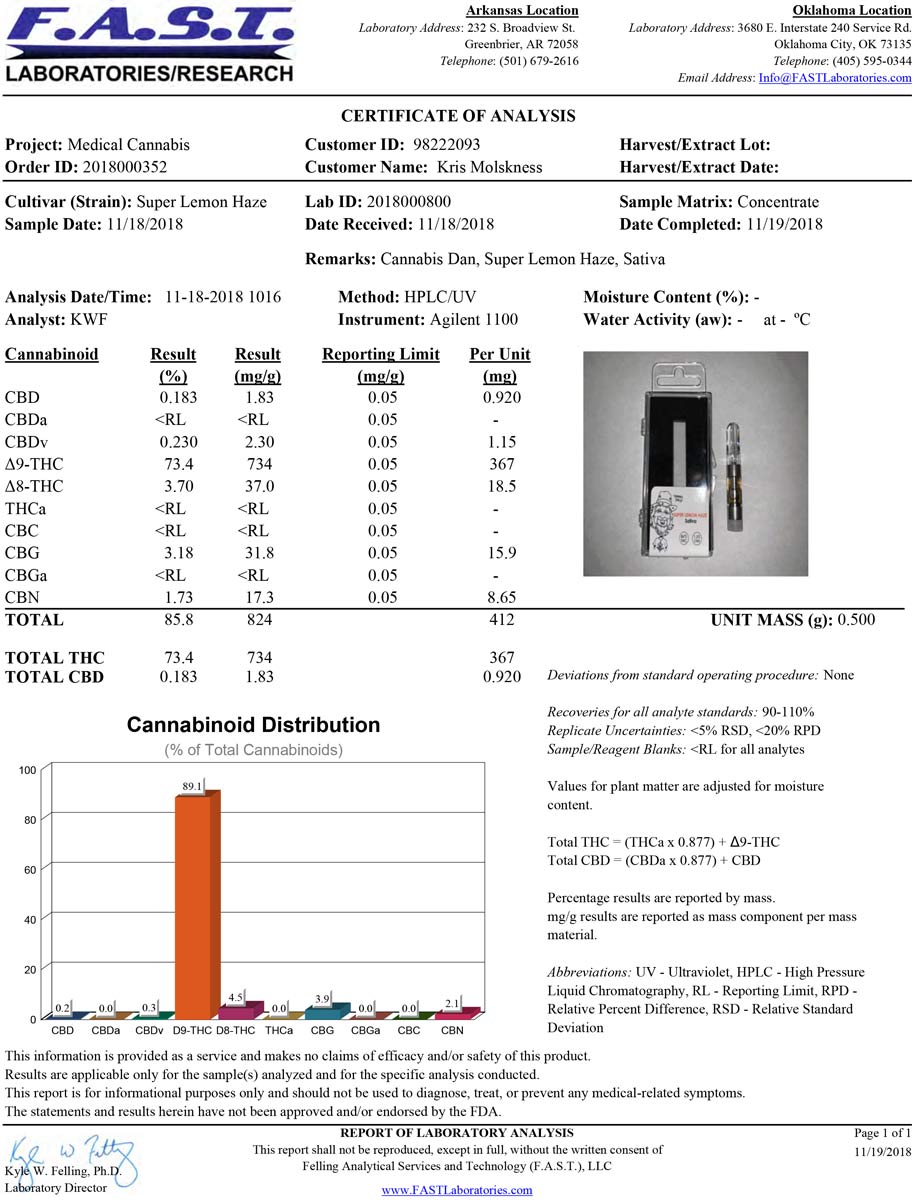 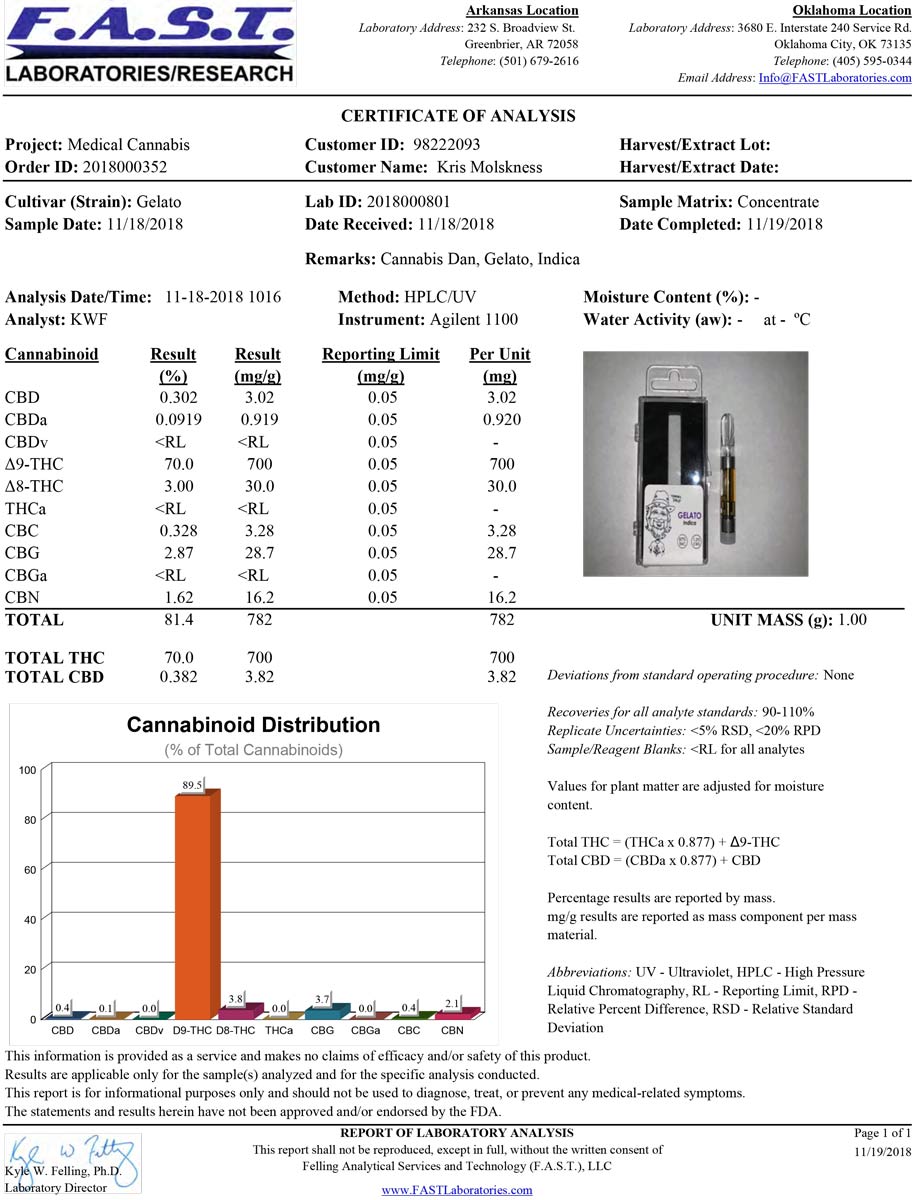