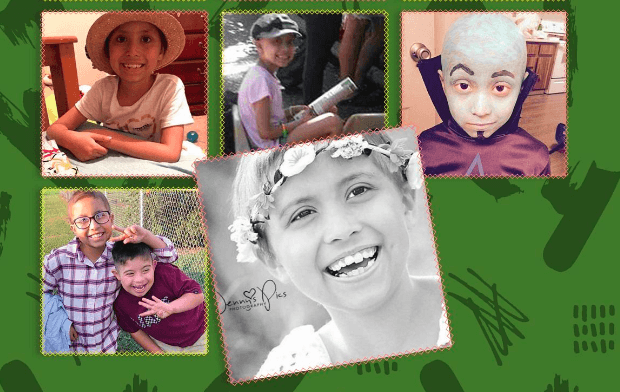 It seems like not too long ago there was an entire underworld of cannabis patients that have suddenly surfaced and the skeptics are equally baffled and scared by who exactly they are. I was lucky enough to be a part of watching cannabis work firsthand on a 7 year old little girl battling anaplastic medulloblastoma with an amplified myc gene.

Anaplastic medulloblastoma with an amplified myc gene translates to large cell brain cancer with the potential to grow rapidly. She was diagnosed January of 2014 at the age of six.

Alexa “Lex” was feeling under the weather with it being a Friday, her mom Lindsey decided the best thing to do was take her to nearby urgent care clinic where she was diagnosed with a virus and sent home. It didn’t get better and like all good moms it was instinctive her constant mommy nerves kicked in and it was the ER just two days after.

Tests were run and they were still believing it could just be a virus but suggested a cat scan. There wasn’t much hesitation on the doctors part, they rushed back in and said she had hydrocephalus (excess fluid around the brain) and was to be transferred to a larger hospital.

We were all still optimistic realizing that the fluid could be virus related we weren’t prepared for what was to come. It wasn’t long before MRI results determined there was a mass and the cause of the excessive fluid. Our hearts sank but held on to the idea that it could in fact be malignant. Surgery was scheduled to remove what was a 2 cm mass coming off the cerebellum between the spinal cord. Surgery seemed to have lasted an eternity when they came back and even before doing a biopsy they knew exactly what it was.

My mother, my father, my cousin, sister and our close pastor friend Danny. We all huddled up bursting into tears. My head was spinning as I rush outside to call my older sister. My mother blaming herself as a two time cancer survivor and us assuring her it was impossible.

I still remember what I said and I don’t know why it came to me. I told them it was a war and we just survived our first battle. She survived the surgery with no serious damage a small shaving on her cerebellum that made her unsteady for a few days but they managed to get it all during surgery. I told them we needed to celebrate every battle because we weren’t going to fight this all at once.

We still didn’t know what type but we feared the worst. My sister blankly staring, me, googling trying to comprehend what I could. I was watching my baby sister’s world come tumbling in a slow motion explosion and she stared the same stare I saw throughout her entire treatment.

It burns everything her little head was charred. My heart… I can’t describe what that was like to watch.

I’d seen images or movies of these weak angelic frail cancer kids that stirred sadness in my mind but this was not Lex. It didn’t matter how many shots or how many times her port was accessed it was always a fight. Confident that if she fought cancer in the same way she fought nurses she was going to prevail. She did better than we expected but due to a weakened immune system she gets shingles.

It was shortly after finishing a round of antiviral medication they proceed to start her second round of chemo. It was two treatments in that the neuropathy (nerve pain) was uncontrollable. They tried several medications but nothing was helping. Lindsey recalls the night she heard her praying her voice hoarse from all the screaming she did during her burning attacks.

They were hitting her every thirty minutes and they couldn’t find medication that could tackle it. She was down on her knees pleading with Jesus, “Jesus wake up, why aren’t you listening?”

Our Pastor Danny had been pushing for my family to consider moving her to Colorado he had the experience of working as a chaplain for hospice and had seen a lot of families looking for other methods to medicate.

The number of elderly people consuming cannabis continues to grow. I decided as the black sheep I was going to be the one to test this. I took her. If my sister took her she’d risk losing her. After one dose she was able to sleep six hours.

Through the help of the National Cancer Society after googling our rights I consulted them about moving her and they helped properly switched doctors and obtain all medical records as well. In the state of Oklahoma parents risk losing their children if they don’t follow through with the recommended treatment.

I watched a thirty two pound empty eyed little girl become a goofy kid all over again. We had honorary family in the Denver area so we were lucky she had a place to stay. She gained seven pounds within the first month she was there.

I was able to make it out for her last chemo and she was bummed she left her chemo blanket in Oklahoma so of course it was an excuse to buy a new blanket. We couldn’t just get a blanket without matching pajamas, Lex dressed as Batman and I am dressed as Superman.

“This isn’t my chemo blanket, this is my party blanket.”

On the last day of chemo we’re scrambling around in a house full of non morning people we managed to make it out of the house with everything. I look back Lex is smiling I ask her, “Lex did you pack your new chemo blanket?” Without hesitation she’s quick to correct me, “This isn’t my chemo blanket, this is my party blanket.” She jokes about how “gangster” she is because she tried cannabis at age 7.

I am pretty proud of this kid and know her strength is so apparent at such an early age as she continues to heal from the damage caused by chemotherapy and radiation.

It saddens me that there exists a stigma, a drug that causes so much damage to kids isn’t frowned upon but only because it doesn’t make them feel good.

Teresa Grossnicklaus is a mother, artist, and advocate for medical cannabis. She is using her passion for plant based extracts to educate others through her company T3 Cannivation.