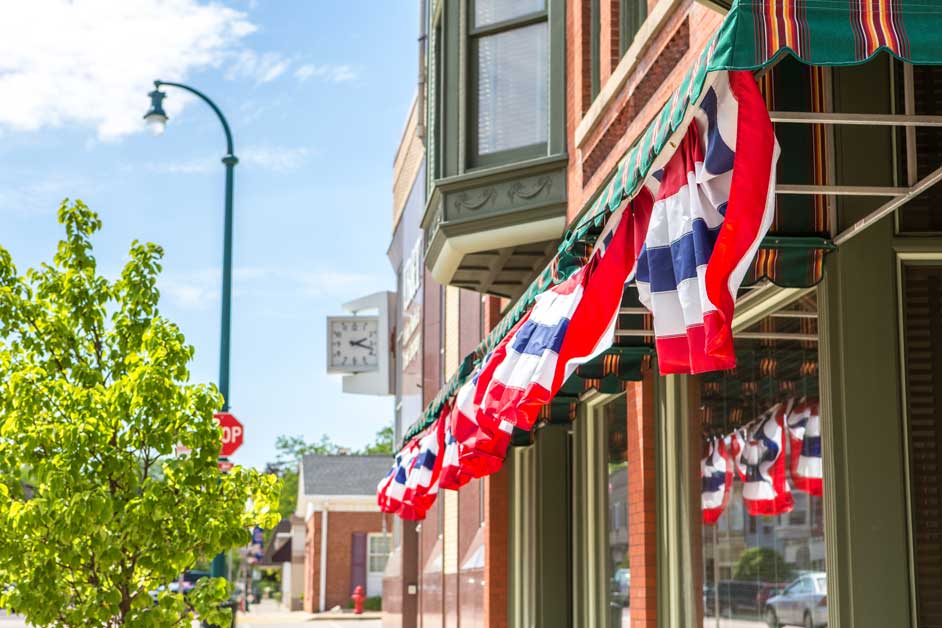 In the movie Back to the Future, Doc Brown needed a flux capacitor and 1.21 gigawatts to go back in time. In Oklahoma, all you need to do is travel outside of the big city and head down an old 2 lane highway till you find one of the many small towns and miles of beautiful scenery that this state has to offer. Like 281 North off of I-40, just 30min west of Oklahoma City, for example.

Five minutes into the drive on that highway you will see yourself staring at miles of farmland, cattle, and dirt roads with rolling hills that you can see until they go over one final hill into the unknown. You will eventually pass through the very small town of Geary, OK which if you pass through on a Saturday afternoon you are likely to see a larger fellow in overalls with a mid-chest length beard sitting in a chair in front of his little old house right off the main road as if he’s watching all who travels through his town. The next thing you will notice on this drive shortly after leaving Geary is a large hill off in the distance.

Living in most parts of Oklahoma all you see is flatland, so a hillside like this is very noticeable and awesome looking. You think you will never get to it and at times think the road will curve in the opposite direction but you eventually curve back around to it. As you do, you notice a horse looking figure on top of the hillside. Then as you get closer you realize it’s a wooden creation of a Native American man sitting horseback next to three crosses as if to implore you to remember all who traveled this land before you.

Eventually, you will come to the town of Watonga, OK. My first time into town I swore I hit 88 MPH, got struck by lightning, and traveled back into time. After passing a large mill, I turned onto Main Street and went over some railroad tracks, passed a rolling tumbleweed, and entered into historical downtown. As I did, I could see the American Flag painted on the side of an old family hardware store with “Old Glory” herself waving in the Oklahoma wind on a flag pole next to the building. And it is there across from that building that I found Grace.

When situations occur that some would deem “out of this world” some believe its phenomena, miracles, mysteries, karma, and some just chalk it up to “stuff happens”. Well for Melody Horton, the only thing she believes that saved her husband Joe’s life from a horrible drug addiction that cost him a welding business, was God’s Grace. So 9 years later, when they were thinking of a name for their business, she says “Grace” seemed like the only right and fitting choice.

Melody has fibromyalgia and depression and was on Lyrica and Prozac for years. One day she found CBD and it changed her life. She says it was the only thing that truly stopped her pain. She became an instant believer and Joe was soon to follow. So after tossing around the idea for a while and after taking an afternoon drive looking at buildings, they decided to open up a CBD store. Then after hearing of all the powerful stories about THC being helpful as well and doing good things for the people in the state, this past February they decided to open a dispensary side to their store so they can help those in need right in the small town of Watonga.

Did they set up shop outside of town so they wouldn’t draw attention to themselves or ruffle any feathers in the small town that has 10-15 plus churches? Nope! They set up their store right in the heart of Main Street.

As to the question of why Watonga, OK? Melody can answer that with one word. Priorities. Their grandson was born on April 17th of last year and they wanted to move closer to him so they can watch and help him grow. So they scouted the best location between Joe’s job and their grandson, sold everything they had, bought an RV, hit the road, and set up life in Watonga.

Watonga, OK was first set up as a tent city on the day before April 19th, 1892. It’s most famous resident, Clarence Nash, was the voice of Donald Duck for 50 years and was hired by Walt Disney himself. Watonga was once home to the state’s only cheese factory and because of it, have an annual Cheese and Wine Festival that takes place every year featuring contests, local artists, a solar bubble tower, and a stilt-walking adventure.

This may be the most action-packed weekend the town has. For the other 51 weekends of the year, the town becomes pretty deserted. The population in Watonga has decreased since 2010 by a couple thousand and now has a current population of around 3,000 people. As for the store owner of Clewell’s Family Hardware and Appliance, directly across from Grace CBD and Dispensary, he’s just glad to see another shop open on a Saturday afternoon.

That was about the only positive thing he wanted to say about Grace when I stopped in to ask him questions. He said “He’s not pro-cannabis, but it’s the law of the land” so he respects what they are doing and hopes it does some good for the economy. Melody says at first the city was trying to fight back against the industry but once they realized what the law was, they accepted it and have actually been great to them.

They themselves have been freed from all of their former medications and have never felt better according to Melody. They are like new people. They have experienced the power of cannabis first hand and now have their sites on sharing that experience with the people of Watonga. If only more cannabis brands in the state cared about the people of Watonga as much as they do.

When opening a dispensary in a city with many dispensaries within a 40-mile radius and not having any connections, it may seem difficult and stressful at times to find products for your shop. For the most part though, once you put that “OPEN” sign up, you will soon find yourself being offered and pitched products sometimes on the daily. From your cannabis-infused products to cannabis merchandise, paraphernalia, and even art. You will find yourself having options.

In small-town dispensaries here in the state that are located far from the city limits, that is not the case. Unless a grower or processor is in their area, most of these dispensaries only see products leaving through the front doors of their shops and never entering. I started to get that feeling more and more on my Tokie Tee travels, but I saw this in Melody Horton’s face the first time I met her at the GreenGrow Expo at the beginning of March.

She asked how many designs of ours she would have to order for us to mail her shop some to Watonga, Ok. I told her forget mail, if she ordered even one of our designs, I would personally deliver them so I could visit the shop my brand was being welcomed in. If her jaw was any looser, her mouth may have hit the floor. It’s like she heard that the earth was flat. She was shocked. And I knew at that moment that the dispensaries, and in return, patients in these small towns are being forgotten about.

Not only is it hard for them to find products, but it’s hard to find products that don’t come attached with a minimum order requirement within the ideal purchase range for a small town dispensary. Joe Horton, like many of these small-town dispensary owners, has to drive to the city 1 to 3 times a week to get products for his shop and for his local patients. They literally have to go the extra mile for those needing medical cannabis in small town, rural Oklahoma.

For some patients in the area, they just go into the city themselves and stock up on medicine while shopping for other things they can’t get in their little town which makes for slow weekends at the shop. Others don’t have that luxury or capability. It is up to each business owner to decide how far they are willing to go to help each Oklahoman in this state have access to the best medical cannabis options this state has.

They will have to decide if those extra miles fit into the business plan they had set for their company in the beginning. In the meantime, the folks of Grace CBD and Dispensary and all the other small-town caring dispensary owners will do what they have to do to get their patients the best options they can get.

Living in the OKC metro area for 8 years now, I’m still finding new things to do and seeing places I haven’t seen before. The big city life provides so much fun and excitement. It provides whatever you need to not only survive in life but to live it to the fullest and biggest and fastest. There is so much excitement in the future and what tomorrow’s technology may bring. There is so much within a call or even a text away. And all of that is great. For the most part. Sometimes though, it’s good for us to take a trip down memory lane and remember where we, and this state, started so that we may appreciate the road that lies ahead even more. Sometimes in life, it’s good to unplug, unwind, and detach yourself from the day to day things that keep your mind mouse running which keeps that wheel of thought spinning. Especially for folks like myself who battle anxiety. Sometimes it’s good to wake up, medicate, and plan a day of nothing but you and the road and whatever that road may bring. And if you don’t know what road to lead with, 281 North toward Watonga and Grace CBD and Dispensary ain’t a bad starting point.