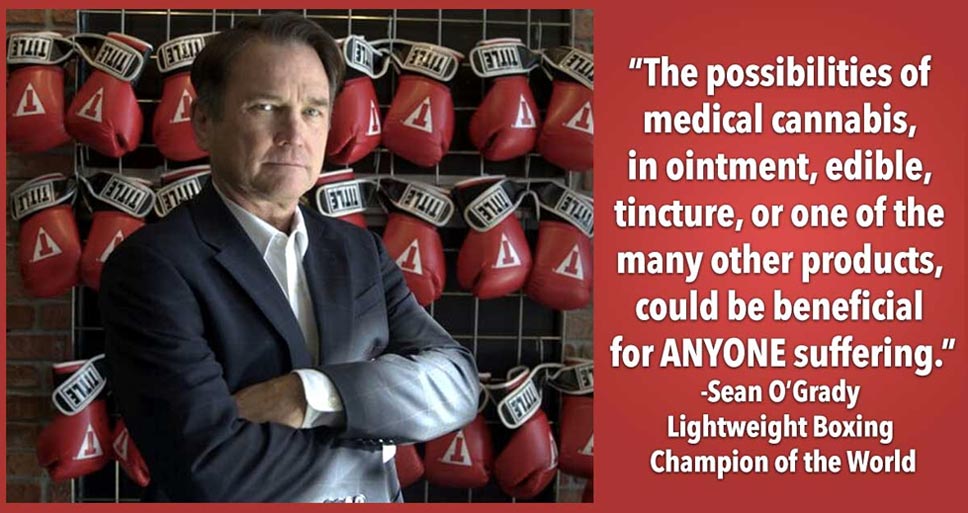 Everyone has something that happened in their life that has shaped who they are and what they do. And for Sean O’Grady, Lightweight Boxing Champion of the World, this is no different.

Sean was born into a life of boxing; trainer Pat O’Grady and promoter Jeannie O’Grady, with his first fight at the young age of 9 years old… it is safe to say, boxing ran through his blood!

Born in Texas, Sean and his family settled in Oklahoma City when he was 11 years old. It was here, that he spent his days in the boxing gym with his father as he trained other competitors and took in everything he saw. Sean would spar with anyone that would let him, regardless of their size or experience. Those that watched him fight, knew they were watching a “champion” in the making. His determination, impressive movements and professionalism was proven every day.

That champion, the “Green Machine”, made his professional boxing debut on January 21, 1975. A scheduled ten-round bout that lasted just one, didn’t leave his fans disappointed. People everywhere, especially his hometown fans in Oklahoma, were enthusiastic about the potential of this young boxer. Fighting every two weeks, emerging victorious more often than not, Sean fought only a few bouts lasting more than a couple of rounds. Sean was a force to be reckoned with – and his opponents knew it. After an already successful professional career, Sean went from a 15-year-old club fighter to a world champion boxer. He went on to challenge Hilmer Kenty in a fifteen-round bout for the WBA World Champion Title on April 12, 1981 and won the Championship Belt, by unanimous decision. He was entered into the World Boxing Hall of Fame in 1992 with a final record of 81-5 with a total of 70 wins by knockout.

Being an Amateur and Professional Boxer for over 24 years, the stresses from boxing proved to have lasting effects, far beyond the end of Sean’s professional boxing career. Pain and soreness were things he had grown accustomed to and quickly became his way of life. During training, his father would use a homemade topical ointment to help alleviate as much of his pain as possible after each fight. This remedy was a concoction of rubbing alcohol, wintergreen, and an assortment of other ingredients.

Even in Sean’s retirement today, the stresses endured during his career are still present, suffering from chronic foot and back pain, and arthritis in his hands and knees. One day his wife, Robin, purchased a cannabidiol (CBD) topical ointment for him to apply to his hands and feet. Sean did notice some improvement from CBD so on a trip to Colorado he purchased a medical cannabis topical ointment containing both CBD and tetrahydrocannabinol (THC). The results of medical cannabis were instant, allowing Sean to start running and workouts while reducing his pain.

Unlike the old “homemade” topical ointment the medical cannabis topical ointment wasn’t harsh to his skin and rehydrated it as well. Sean couldn’t help but think, “I wonder what this could have done for me during my career in boxing”, he reflects on this for a moment and continues, “Or what it could have done for my Dad, a WWII Combat Veteran, who fought PTSD for most of his life.”

Sean’s father, Pat, joined the United States Marine Corp to serve in the South Pacific during World War II. Pat was in the First Marine Division and saw combat in Guadalcanal, Peleliu, Iwo Jima, and Okinawa. He was affected for the rest of his life and like many from that era, he would never talk about the things he saw and the friends he lost during his time served. He, suffered from PTSD. The effects of war continued until he died in 1988. Pat relied on the use of opioids for pain and anxiety relief and today there are entirely too many cases, similar to Pat’s that result in a path of addiction of these opioids or barbiturates, sometimes even leading to death.

Sean says, “The possibilities of medical cannabis, in ointment, edible, tincture, or one of the many other products, could be beneficial for ANYONE suffering.”

With the shifting attitudes towards this inspiring social movement of medical cannabis, Sean knew he wanted to help, but overturning decades of stigmatization of cannabis as a gateway drug will be no easy task.

It’s these moments in life that shape you and make you who are today. For Sean, finding that pain relief he needed and knowing he is able to help others do the same, is what makes him most proud of where this journey has led him and his family today. “I want to use my platform to help educate people on the potential benefits of cannabis and to help patients who have been waiting far too long for the opportunity to legally obtain this medication.”

For a boxer like Sean, medical cannabis topicals and tinctures have improved his life dramatically. He feels relief from the years of wearing his body down every day in the ring.
Having the knowledge now, that THC and CBD can help as an anti-inflammatory along with pain relieving properties, and witnessing the effects first-hand, is why Sean decided to embark on this new journey and open Ringside Medical, Cannabis Dispensary – located at 14201 N. May in Oklahoma City.

Knowing that cannabis can also lessen anxiety and insomnia and help those with PTSD live happy, healthy lives is yet another reason why cannabis education has become his passion. He wants to be able to give any former or current athlete, professional or recreational, and any patient that needs help – that fighting chance.